Would you like to switch to the accessible version of this site?

Don't need the accessible version of this site?

Pet Of The Month

Pet of the Month: JAKE 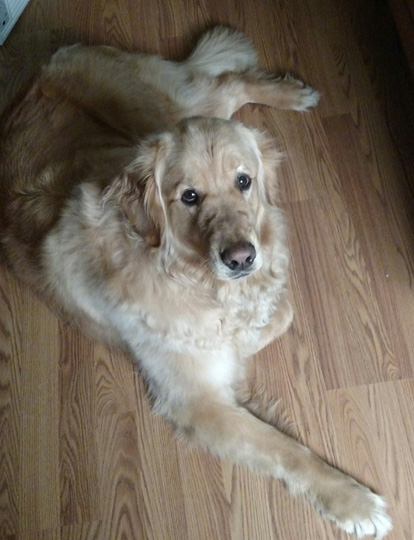 Happy "Pet of the Month" to JAKE!
OCTOBER 2017
Jake's parents told us a little about Jake... "Jake is a very good dog! He likes to play fetch with the ball,and greet people by tugging on their shirt!" We really enjoyed Jake's company at his recent visit. His brother, Vinnie gave him stiff competition this month for our selection. What a fun household!? Thanks to Jake and his family! Congrats!

Pet of the Month: Blaze 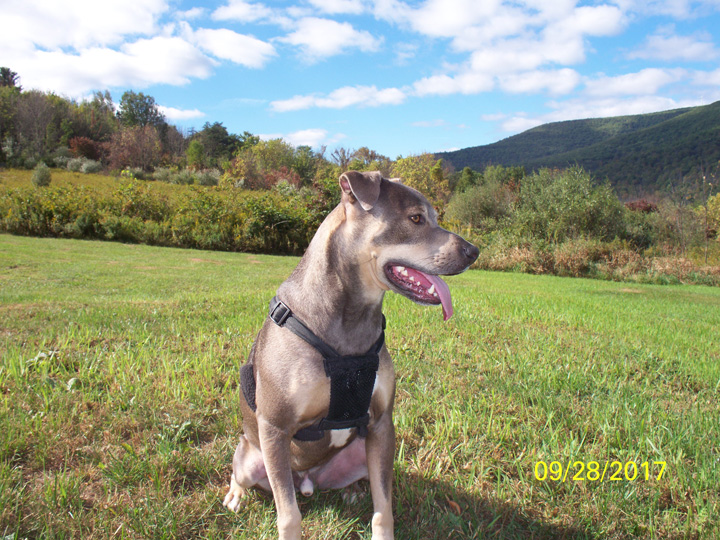 Happy "Pet of the Month" to Blaze!
SEPTEMBER 2017
Blaze's devoted parents had this to say about their special boy: "After looking at hundreds of pictures of available pups in local shelters, we came across this happy looking pup “Blaze”, part Italian Grey Hound and part American Staffordshire terrier and we fell in love at first site. It turned out that Blaze traveled the east coast from being rescued in Alabama to being fostered in Northern Vermont. After a road trip Blaze came home with us on October 3rd 2015. Blaze is the happiest loving dog and has so much personality and character. He is quick to learn anything. Mostly He is just fast, everything he does is at high speed (it must be the greyhound in him). He is always so excited to meet new people, kids and dogs. He loves hiking the mountain where we live every morning and then going for a ride in the car. He loves meal time and insist on having a rawhide every evening while watching TV, His favorite show is Pitbulls and Parolees on the Animal Planet; He also loves watching Football. Then its play ball until bed time, sometimes He will play ball by himself tossing the ball in the air and catching it or ahead of him and chasing it around the room. Blaze has brought so much joy and excitement to our family." CONGRATULATIONS to Blaze! He has many fans here at Bunker Hill!

Pet of the Month: Tucker 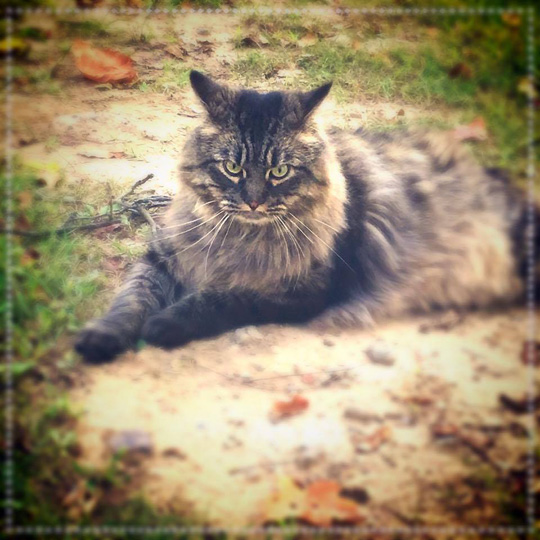 Happy "Pet of the Month" to Tucker!
AUGUST 2017
Tucker's parents had this to say about their boy... "Tucker is 3 years old and the only cat out of his litter to have long hair. He's also the only cat out of the litter to "look" maine coon! He gets all the love and attention, he's the only fur baby we have. He loves to lay in his cat tree, in front of the window, and soak up the sun. He enjoys belly rubs and long nights prowling the woods. You could say he's spoiled... When he meows, we go running! He prefers dry food and begs for it constantly! He has the best "grumpy face" and always looks grumpy in pictures. Even though Tuck was the MOST expensive free cat, we feel lucky to have him! We are sure he's enjoying life thanks to the love and care Bunker Hill Veterinary Hospital & Northeast Veterinary Referral Hospital have shown him. We are lucky to have such great veterinarians and such great animal care in our area. " Thanks, Tucker! Congrats!

Pet of the Month: Harper

Happy "Pet of the Month" to Harper!
JULY 2017
Harper's mommy has this to say about her sweet girl... "Harper is a Beagle-Bassett from Factoryville, PA. She loves chasing snowballs, playing with the cat, snuggling, and hiding bones in the couch. Harper's favorite tricks include standing up to spin around and waving goodbye. She doesn't like to get wet but loves being dried off with a towel. Harper greets her humans when they come home by sprinting to the door and rolling over for a belly rub!" Congratulations, Harper!

Pet of the Month: Macy 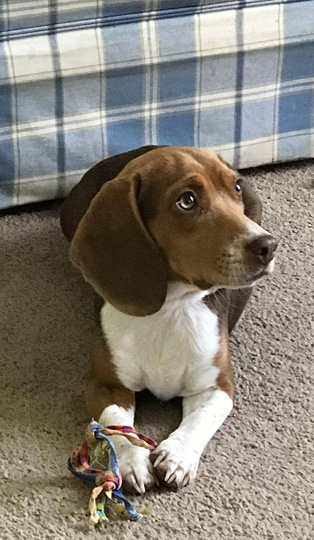 Happy "Pet of the Month" to Macy!
JUNE 2017
Macy's mommy shared a little diddy with us... "Macy was born in Monroe, NC, on September 10, 2016. She is a chocolate beagle. She's very small and lovable. Macy came to live with me, Mary, in March 2017. I was looking for a beagle after losing my precious Abby. I found Macy at Sunshine Acres. I fell in love with her picture and made arrangements to bring her home in January. Unfortunately, I was unable to get her at that time. I carried her picture on my phone but resigned myself that she would find another home before I could get her. In March, I went to NC to visit my daughter and grandchildren. To my surprise, my brother, daughter, and son conspired to get Macy for me as a birthday gift. What a BEAUTIFUL present. She's a spunky little puppy who's loving Pennsylvania." Great Job, Macy!

Pet of the Month: Zoom 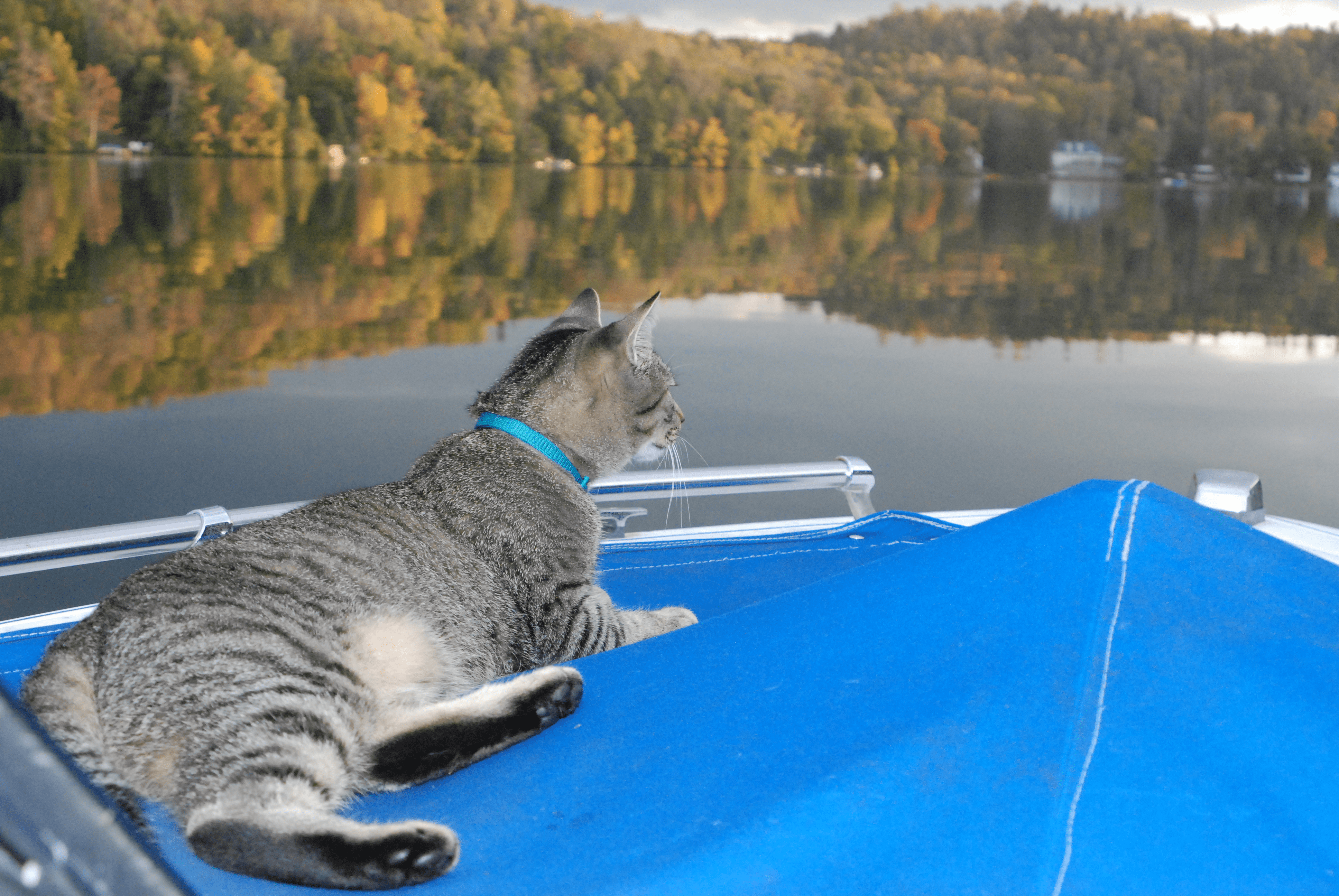 Happy "Pet of the Month" to Zoom!
MAY 2017
Zoom's mommy told us his story... "Our Zoom Zoom was born as a feral in May 2008 at Lake Sheridan. We had just moved here full time the end of 2007 and had started rescuing feral kittens. Zoom was in a litter of 3 kittens. We found a home for 2 but decided to keep Zoom Zoom as he was so playful & sweet. Over the years he liked to go on boat rides & be the king of Lake Sheridan! If left out all day, he would visit all our neighbors. They'd always give him a treat! Congratulations to our 9 year old Zoom on pet of the month! He deserves it!"

Pet of the Month: Duke 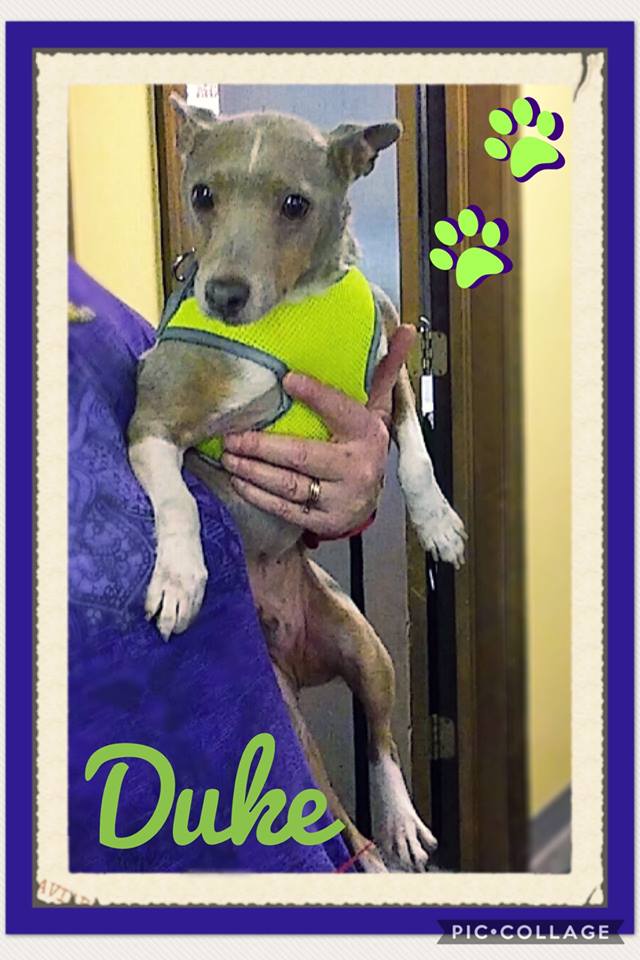 Happy "Pet of the Month" to Duke!
APRIL 2017
Duke was adopted on March 18, 2017 after his original owner had sadly passed away. He now has two very committed and loving parents. We determined he was older than that and sadly afflicted with a heart murmur. Duke certainly doesn't let that slow him down! Duke loves treats. He enjoys playing in the back yard and rolling on the couch pushing off every throw pillow! We are delighted that Duke was given a second chance in a loving home. He is really coming out of his shell and getting comfortable in his new life.
Congratulations, Duke!

Pet of the Month: Tommy 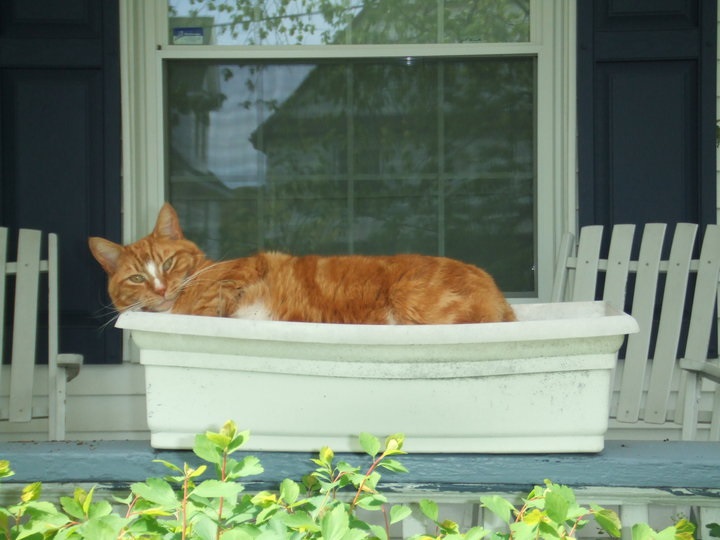 Happy "Pet of the Month" to Tommy!
MARCH 2017
His caring Mom had this to say about him:

Tommy was my elderly neighbor's cat. When my neighbor went into the nursing home in 2012, I inherited Tom and he became the "King of the Castle" in my home very quickly! Everyone loves Tom, and Tom loves everyone. He is a very easy going fella and is used to many foster dogs living in our home as well! Tommy always goes with the flow. Tom is famous on the block, and everyone loves him. Tom also has a new kitten sister at home, McKenzie. He enjoys visiting his friends at Bunker Hill, especially Leslie, who gives him his OraVet treatments on a regular basis to keep his pearly whites healthy! He loves Dr. Michele and all of the staff at Bunker Hill as well. He enjoys sitting in the waiting room, like a person, and loves all of the attention he receives, both from the staff and the other clients who are amazed at how patiently he sits on his chair in the waiting room!
Congratulations, handsome boy!

Pet of the Month: Desi 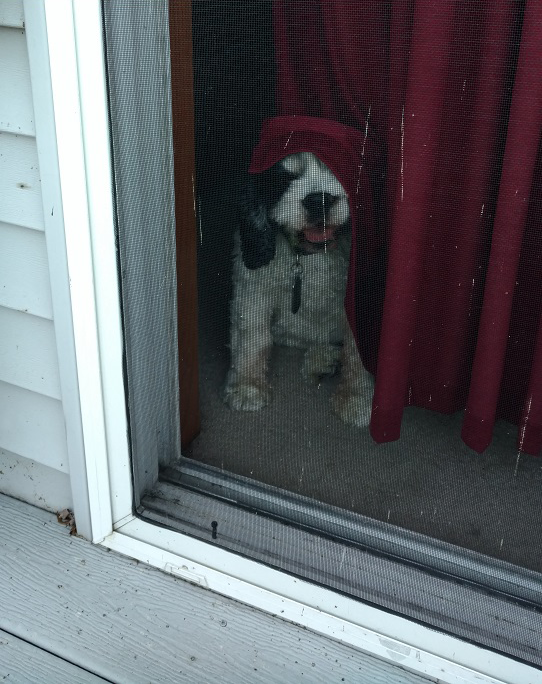 Happy "Pet of the Month" to Desi!
FEBRUARY 2017
Her loving Dad had this to say about her:

Desi was born in 2003 to a mother who loved her so much, she kissed her left ear right off! She was a wedding gift to James and Jennifer Mott, and got named to match her new furry big sister, Lucy. James is in the Navy, so Lucy and Desi have lived in Florida, California (twice) and Pennsylvania. Desi loves a good car ride, and has the cross country miles to prove it!

Lt. Commander Mott was stationed in Italy rather suddenly in 2015, and everyone knew Lucy was afraid to fly. Desi refused to leave her sister's side, so they moved back to Pennsylvania one more time to live at Saddle Lake with the Mott's old friend, Matt Doyle. With Matt's chocolate lab, Brandy, the three old dogs quickly became the Golden Girls.

Desi was a good sister to Lucy right to the end, and she misses Lucy very much. Since she hates to be alone, she tries to see Dr Zajac, Dr Turk, and her good friend Brianna as often as possible!
Congratulations, sweet girl!

Pet of the Month: Brutus 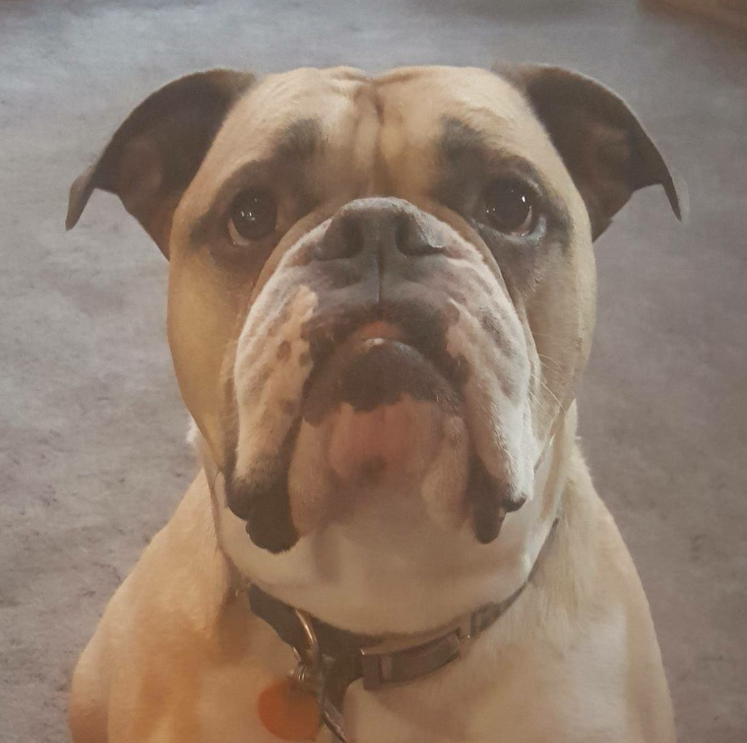 Happy "Pet of the Month" to Brutus!
JANUARY 2017
His loving parents had this to say about him:

"We rescued Samuel from Lehigh Valley Humane Society in February 2015. He was very skinny and didn't answer to his name so we tried a bunch of names and he seemed to like Brutus. He was already potty trained, knew how to sit, give paw, and stay. Best of all, he got along with our other dog, Diamond.

He barks at thunder, loves his toys, makes snorting noises that make him sound more like a piggy than a dog, and hates loud noises. He also snores louder than Marshall.

He is the best dog, with the greatest personality. We love him so much and thank our lucky stars everyday that he was at that shelter when we were looking for a companion for our baby girl Diamond."
Congratulations, big guy!

Find us on the map